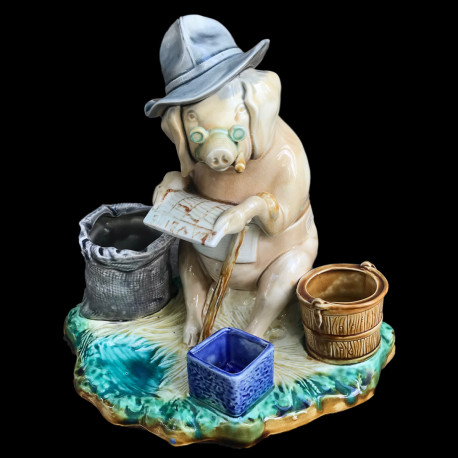 Onnaing style Barbotine Tobacco Box representing a sitting pig with a cane, wearing glasses and a blue hat, smoking and reading a French newspaper called "La Viene". Around it, three buckets to hold cigarettes or matches. The head of the pig can be removed and discover the hole of the tobacco box.
French work realized in colorful Barbotine in the 19th century, in the style of the French Onnaing Manufacture.

Onnaing Manufacture was created in 1821 by de Bousies brothers, Ferdinand Louis and Charles (Vicomte de Rouvery) with their cousin the knight Adolphe de Bousie and the Baron Frédéric de Sécus. Firstly, the Onnaing manufactory was just a new location of the Belgium Nimy Manufacture intended to bypass custom duties. From 1827, the manufactory is redeemed several times and became in 1894 the anonymous society of Onnaing Faïencerie. The company grew during the whole 19th century and produced various items realized with a clay paste garnished with relief ornaments. Pieces produced were usually small-sized, full of humor, fantasy and colors. This art usually expresses with caricatural characters, animals, plants and flowers. The manufactory failed to recover after the destruction caused by WWI. Production stopped in 1938 and the manufactory closed in 1947.

7 other products in the same category: